Please join us for an essay prize winning talk at UIC on Wednesday – 1430 of University Hall, at 11.15am (or via Skype in Geneva): full details above.

If you are going to be in Seattle for the PSA this week, please come by the quantum gravity lunch that we have organized on Saturday 12-12.50pm, at the Yard House pub. Not a free lunch I’m afraid, but good conversation I hope: hosted by Nick Huggett, Nic Teh, Richard Dawid, Sebastian De Haro, and James Read. See you there! 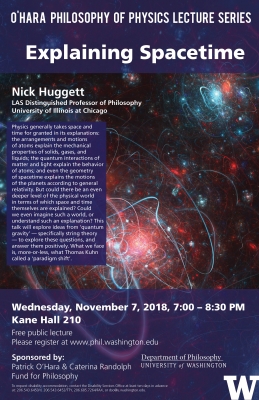 Abstract: I distinguish between two versions of the black hole information-loss paradox. The first arises from apparent failure of unitarity on the space- time of a completely evaporating black hole, which appears to be non- globally-hyperbolic; this is the most commonly discussed version of the paradox in the foundational and semi-popular literature, and the case for calling it ‘paradoxical’ is less than compelling. But the second arises from a clash between a fully-statistical-mechanical interpretation of black hole evaporation and the quantum-field-theoretic description used in derivations of the Hawking effect. This version of the paradox arises long before a black hole completely evaporates, seems to be the version that has played a central role in quantum gravity, and is genuinely paradoxical. After explicating the paradox, I discuss the implications of more recent work on AdS/CFT duality and on the ‘Firewall paradox’, and conclude that the paradox is if anything now sharper. The article is written at a (relatively) introductory level and does not assume advanced knowledge of quantum gravity.

And another video – a talk by Josh Norton and Nick Huggett, aimed at a popular audience, discussing the relation between physics and philosophy, using examples from early modern science and from quantum gravity. https://youtu.be/JxZZ6Wv_uaI

First Lee Smolin’s amazing lecture from the Midwest Summer School, reflecting on the strengths and weaknesses of different approaches to QG, and his reflections on where to go from here: https://beyondspacetime.net/summer-school-2018/msspp1-lecture-abstracts/

We have just published most of the videoed talks from the Midwest Summer School in Philosophy of Physics (MSSPP1), held in Chicago in July 2018. If you weren’t able to attend (or if you were, but would like to relive it!) you can access through the video on our YouTube channel, or through the conference website (where you will find abstracts).

Greetings from Beyond Spacetime at the start of the new academic year!

A big thank you the John Templeton Foundation, for their generous support over the past three years; this website documents much of what we achieved. While the grant has now expired, Beyond Spacetime activities will continue, including speakers to be announced here soon – watch this space!

We have just posted some new videos to our YouTube channel: a 100-level lecture on spacetime from Tushar Menon and James Read, and a pair of 200-level lectures on dualities by Keizo Matsubara. There is also a stack of new talks, including Erik Curiel’s Two Paths to the Einstein Field Equation from Horizon Thermodynamics. Find the link above, or from the speaker page above. Enjoy!