Abstract: The inflationary era, which is nowadays considered to play central role in cosmology, and it might offer the only circumstance where Quantum Theory and Gravitation form the basis for the understanding of observationally accessible phenomena. Yet, the success of the inflationary paradigm in accounting for the emergence of the primordial cosmological in-homogeneites, with the correct spectrum, is overshadowed by the old interpretational difficulties of quantum theory. We will argue that issue is related to the “measurement problem” which in this context takes a particular striking form that seems to make unsuitable most proposals to address the general problem. The basic question becomes one of symmetry breaking: Considering that, according to the inflationary paradigm, the universe is, at a certain stage, characterized by a state that is homogeneous and isotropic, both, in those aspects that are deemed suitable to be described at a classical level, and at those requiring a quantum description (i.e. the so called quantum fluctuating field); how can we explain the transition from such stage to something containing the primordial inhomogeneities and an-isotropies that are thought to seed the growth of cosmic structure?

2013-09-27 18:06:24: Daniel’s topic:  the emergence of the seeds of structure from quantum fluctuations during the inflationary cosmological era.

This is a situation in which GR, QM, and observation come together (witness the beach ball!).

2013-09-27 18:08:43: Inflationary basics:  Takes the universe from a relatively generic state after the Planck era to a state with the seeds of cosmic structure (which we then observe as the CMB, as modeled by the beach ball).

2013-09-27 18:12:56: Inflation is modeled by the dynamics of a scalar field.  One then introduces perturbations in the scalar field.  One then quantizes the perturbations in terms of quantum fields.  One can then calculate the two-point function of these field variables.  And one can then extract the “Power spectrum” from this 2-pt function.  And…. eventually this produces a description of the CMB that can be compared, very favorably, with observations.

2013-09-27 18:15:30: But:  If one considers a slightly different theoretical quantity, the resulting prediction is not confirmed by observation.

2013-09-27 18:17:13: To address this, Daniel suggests a step back:  We need to identify a physical process that can explain the emergence of the seeds of cosmic structure.

Proposal:  Add to the inflationary paradigm some spontaneous dynamical collapse of the state function.

Daniel’s approach:  Adapt this to situations involving quantum fields and gravitation, within a semi-classical framework.  During inflation, gravity is classical, but matter is quantum.

Audience:  So the deepest level should be ordinary QM?

Daniel:  It should just be quantum, but whether it’s ordinary QM is unclear. 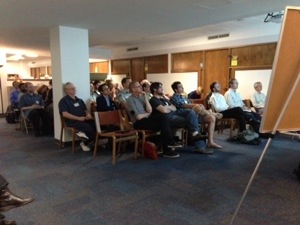 At the early stages of inflation, the scalar field’s vacuum state is homogeneous and isotropic (the Bunch-Davies vacuum).  Now apply to this, the CSL theory (a particular dynamical collapse theory).  The random collapses that result are then responsible for the emergence of structure out of initial homogeneity/isotropy.

2013-09-27 18:34:58: The quantity of interest (that is zero without CSL, but non-zero with CSL) is a result of a random walk on the complex plane…  One can now calculate this quantity and compare it with the CMB data, and this, it turns out, let’s us calculate CSL predictions (like the collapse rate parameter).

Audience:  Can you say a bit more about fine-tuning?

Daniel:  The technique has been applied to a very simple model.  We haven’t yet considered more complex models.

Audience:  Question about the Bunch-Davies vacuum.  Can you use other vacuum states?

Daniel:  Yes, but that doesn’t change the fundamental question:  How do you break the initial symmetry?

1 thought on “Sudarsky: Interface of Quantum Theory and Gravity at the Origin of the Structure of the Universe”