still holds, but being a function of derivatives of momenta, it is not directly about

(a function of derivatives of

). Only a special combination of the two first-class constraints, the Anderson-Bergmann (1951)-Castellani gauge generator

unchanged. This problem is avoided if one uses a first-class constraint as the generator of a canonical transformation; but that partly strips the canonical coordinates of physical meaning as electromagnetic potentials and makes the electric field depend on the smearing function, bad behavior illustrating the wisdom of the Anderson-Bergmann (1951) Lagrangian orientation of interesting canonical transformations.

The need to keep gauge-invariant the relation

. Hence the Dirac conjecture about secondary first-class constraints rests upon a false presupposition. The usual concept of Dirac observables should also be modified to employ the gauge generator

, not the first-class constraints separately, so that the Hamiltonian observables become equivalent to the Lagrangian ones such as the electromagnetic field

An appendix discusses analogous calculations for GR and sketches their conceptual consequences.

A project in recovery of Anderson and Bergmann that were clear in the 50s but lost since. Question whether first-class constraints can do their work in isolation, or rather they must work as a team. Idea will be that, for example, change is not lost in GR when we understand better the connection between gauge transformations and first class constraints.

2013-09-29 10:30:48: What is link between first-class constraints and gauge freedom? Team effort or individual? two answers in literature: Bergmann and Anderson argue for former. And that’s correct. G comes from constraints acting in concert. Latter is wrong says Pitts. Can see this by looking at the actual Poisson brackets to find out whether commuting with Hamiltonian entails making no physical change – i.e. generates a gauge transformation.

2013-09-29 10:33:13: Can do some pretty easy tests in classical electrodynamics (em) and just find out. Can show by direct calculation that first class constraint does not, generally, generate a gauge transformation.

And how has this not been noticed?!?

Confusion seems to arise out of failure of associating between Hamiltonian and Lagrangian formulations. 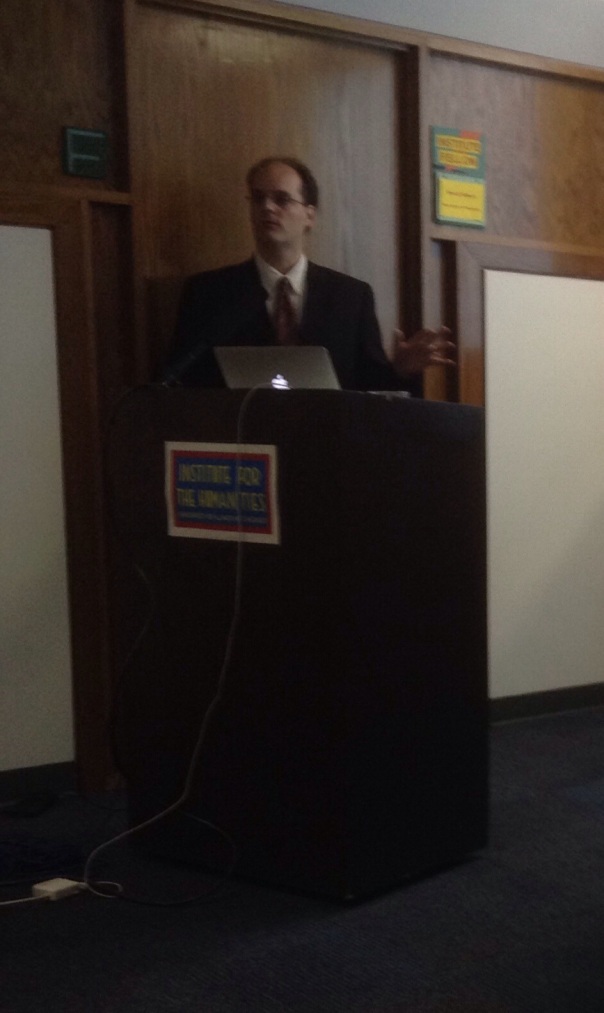 2013-09-29 10:37:49: What goes wrong here? Dirac makes an error in his book – forgetting about the hidden secondary constraint living inside transformed Hamiltonian. Then this error widely propagated in the literature.

Can find the root of much trouble on page 21 of Dirac’s book.

generate a normal coordinate transformation? no

Many examples follow of first-class constraints that do not generate gauge transformations.

Bergmann and Anderson 1951 say sometimes one needs to take a Poisson bracket of a velocity term. Their motivation is unclear. For Pitts it is necessary to make all of this stuff go through.

Get a bad physical change with a secondary first-class constraint.

Can we find a team effort? Yes by combining the primary and secondary first-class constraints.

Now possibility of change re-emerges in GR. Not exactly clear from this, but at least door open.

2013-09-29 10:59:07: Pitts tells us that perhaps there is no coherent notion of Bergmann observables. On the other hand we can tell what Dirac observables are supposed to be – so his conception can be fixed.

Is main idea that we introduce points? No. Doesn’t introduce them primitively. Thinks active diffs don’t make much sense: like building a building, seeing you don’t need it, and knocking it down.

Accused of adding points and having more information. Responds that you only get them after the fact. But what if have two manifolds? Why? Question continues: moving points around gives same physical situation. Pitts: we all agree that points exist in GR, just not individuated until have the metric.

This was a confusing QA session. Not sure what the actual worry of the questions was. Butterfield tries to redirect from point type worries to the actual issue of whether we need to coordinate the constraints in order to generate gauge transformations.

I could not really follow Dittrich’s point. If anyone is reading this, perhaps that can be filled in here.

Argument at length about the connection between phase space and observables generally. Chair cut it off.